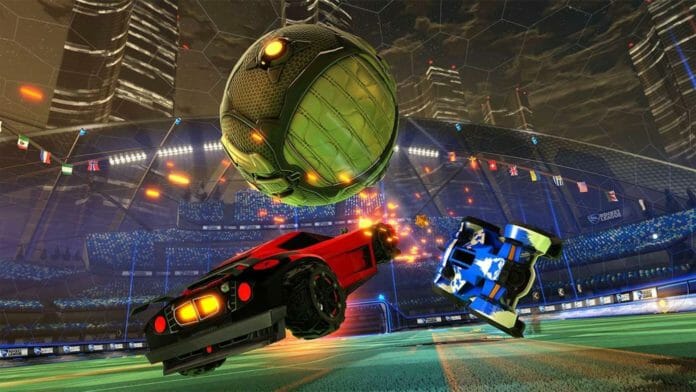 The game that sounds like the most awful genre mash-up ever – racing and soccer – has been a surprise hit amongst gamers. I, like many, first took a look at the PS4 version when it was one of the free games in July 2015′s Playstation+ lineup. Within minutes of my first play I was grinning from ear to ear, shouting at the TV with exasperation and celebration in equal measure. I’d then meet friends and tentatively ask “have you played that game ‘Rocket League’ on PS+?”, only to find they’re as hooked as me.

Here’s why it’s so great.

At the core of the game’s success is the completely open kinesis of it, you are simply the car – a flat box – booting around a large spherical ball. The physics are perfect and within seconds of playing you feel how every tiny twitch of your controls counts.

2. A million possibilities every second

With those wonderfully open physics, it feels like every moment is unique, every shot different from any other that preceded it. It makes games like FIFA feel linear and scripted. Motion captured animations and off-the-shelf goals are replaced by constant freak occurrences.

And so, as you’re completely in control of your destiny, it is far more likely you’ll totally mess it up rather than play the perfect shot. I’ve played well over 500 games now, and I still feel like there’s so much to learn when I come across better players. And aerial play is a whole other thing…

Given how free and open the game is, it requires lots of discipline. Most games have at least one annoying player (dare I say n00b), who just chases the ball like an excited dog in the park, often competing with their own team for balls. When you do land in a game with others who know the score, which I think is happening more frequently as we all get better at it, you quickly form bonds with people and enjoy congratulating them, both with the preset chats (‘Great shot!’ etc) and custom words of gratitude (‘gg’, ‘thx guys’ etc). And “@%£$” of course!

When the last second has expired the game doesn’t end until the ball has touched the pitch. This played out beautifully in the final of this summer’s MLG tournament – the first major competition around the game. I mean, you couldn’t have made that ending up!

At the end of each game you have the option of saving the entire game replay in just one click. You can then go back in your own time and pore over your finest moments, directing them before hitting the ‘Share’ button to triumphantly post the video on your socials.

7. You’re playing Rocket League within a minute of wanting to

Seems like a small point. It isn’t. You can be doing anything other than playing RL at home and suddenly get a craving for adrenaline. Within less than a minute (I timed it) your PS4 is on, the game is loaded and you’re playing against people online. I don’t know if that was a specific aim of developer Psyonix but it’s the fastest game to get playing online I know of, and there’s something so awesome about having that at your fingertips, whether you have a spare 5 minutes or a whole evening.

8. It is a brilliant and legitimate e-sport

Such is the genuine skill you need to play this game, it has quickly become a credible e-sport, and became one of the most watched games on Twitch within weeks of launch. Again, check out this summer’s MLG tournament where some amazing games were played.

I’m not the first person to point this out, but Rocket League is so much more like playing football than straight up soccer sims such as FIFA. You control just one player – you – rather than a team and you must create and take your chances in this often cruel world of open physics. When an opportunity for greatness raises its head you awkwardly strain and stretch to get that ball and the margin between success and failure is so narrow.

Oh yeah, and it was free! But I would happily pay full price to keep playing it, even now. I’ve had more fun out of this game than any £50 blockbuster, so have been happily buying any DLC that comes along, including of course the Back To The Future Day Delorean.

Oh, and did I mention it’s cross-platform? That means PS4 and PC players all compete in the same games. So whichever platform you’re on, jump in!