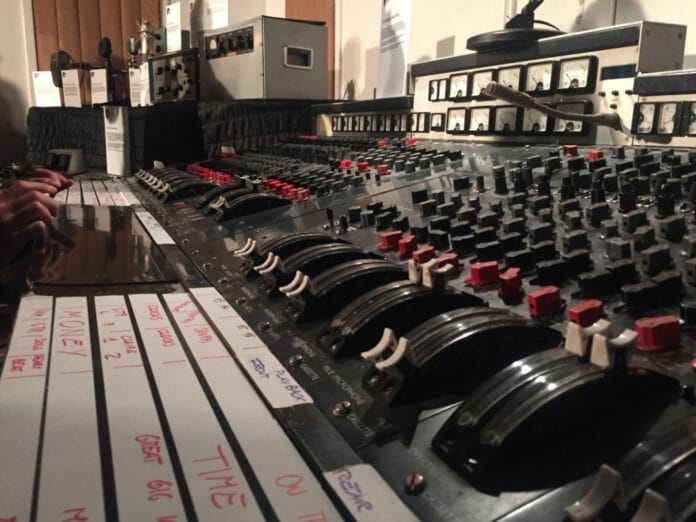 This weekend I went along to Abbey Road in London, the world’s most famous recording studio, to attend a talk by Alan Parsons. As a producer and audio engineer he’s worked on some of the facility’s most legendary output including work by The Beatles and Pink Floyd, before becoming an artist in his own right.

Being something of a music production geek (I used to teach music technology) I had to go and see inside the famous Studio 2 where The Beatles recorded most of their work.

As well as getting the chance to see some pretty cool vintage equipment, all of which could do less than a Smartwatch app today, they had some famous instruments out including the Mrs Mills piano – a Steinway Vertegrand from 1905 used by countless artists and which can be heard on many Beatles tracks. I couldn’t help but play a couple of cheeky chords on its hallowed ivories 😉

Alan shared some great stories, which were a fascinating glimpse into working life there during the 60s and 70s, and explained the various roles he played in now classic albums.

By far the highlight of the evening was him talking through Pink Floyd’s Dark Side Of The Moon whilst multi-tracking it through one of the vintage desks. Bringing up different parts in the mix and explaining them. He had to get the band’s permission to do this for us, as he was essentially remixing the tracks live. It gave the audience a unique glimpse into a seminal rock album, which was fascinating even if like me you weren’t too familiar with it.

Among the various grey boxes on show – it must look pretty nerdy to the untrained eye – was one of Abbey Road’s eight Studer J37 four-track tape recorders. These were used to record albums such as Sgt Pepper, with the more complex arrangements requiring them to have several machines bouncing down to each other to create more tracks. How this compares with modern software is mind-blowing, and yet producers here still achieved amazing results with such primitive hardware.

Another classic instrument was this Hammond RT-3 organ, which makes some incredible sounds and features on plenty of Beatles and Pink Floyd tracks.

A mixing desk created by EMI, back in the day when record labels were also developers of recording technology. This is the TG12345 Mk2, meaning it was the second in a line of four, so in use from the late 60s until the mid 80s. Alan used this to multi-track DSotM for us.

Loved this photo of four excited Liverpool lads posed against that very wall for a photo. Amazing that they spent their career working in this room, evolving from a Mersey beat foursome to the biggest and most influential band ever.

Overall it was really worthwhile, and I’d definitely recommend going to an event here if you get the chance (they don’t happen often). It’s made me go away and re-assess prog rock classics from Alan Parsons, Pink Floyd and the like with fresh, less dismissive, ears. I get why people worship this place too. There’s something undeniably special about being in a specific room where era-defining art was conceived and produced, and where modern heroes came to work each day.